DFSocial is a gaming platform that combines decentralized finance (DeFi), play-to-earn (P2E), nonfungible tokens (NFT) and the best of GameFi. Users can earn from the protocol through various means including staking, farming and predictors.

The GameFi protocol allows users to earn crypto while playing their favorite games like League of Legends, Counter-Strike, Call of Duty, poker, Brawl Stars, FIFA, Valorant, Rocket League and more. With over seventy tournaments hosted, more than $200,000 worth of rewards distributed and a growing community of over 25K community members, the protocol is developing a unique ecosystem on blockchain technology.

DFSocial gaming was launched in December 2020 with the DFSocial ticker built on the Ethereum blockchain. However, the project’s team decided to bridge the token to Binance Smart Chain (BSC) in February 2021, following Ethereum’s outrageous gas fees. The token bridged to BSC was called bDFSocial.

Both tokens had the same value but were meant for different purposes. The DFSocial ERC-20 token focused on DeFi services such as staking and farming, while the bDFSocial BEP-20 token was used for gaming. Now, DFSocial has deployed its new DFSG token on BSC, unifying all its services and liquidities with BSC’s low fees.

The DFSocial ecosystem has numerous services, bringing the best DeFi and NFT GameFi experience to its growing community. These services include:

The best of DeFi

The DFSocial offers a yield farming and staking platform. Users can stake DFSG and earn up to 30% annual percentage yield (APY). They can also participate in the farming vaults offered by DFSocial to earn rewards.

The protocol offers the best NFT experience filled with many collectibles, an NFT marketplace and NFT auctions for buyers and sellers to trade their collections.

DFSocial brings the best gaming tournaments for skilled players to participate and earn rewards. The protocol has a tournament calendar with a lineup of exciting tournaments filled with the best games including chess, FIFA, Rocket League, League of Legends, poker and many more.

The maximum supply of tokens is 21 million DFSG, as already stated. About 2.385 Million tokens were burnt by DFSocial from the previous staking pool of its old tokens so now, the total supply is 18,615,000. A total of 4,750,000 reserve tokens are already locked on TrustSwap. Therefore, the circulating supply is 13,865,000. Below is a breakdown of DFSG initial distribution:

The team shows in their official documentation the current distribution of the reserves as well as the wallets holding the tokens. More information here. 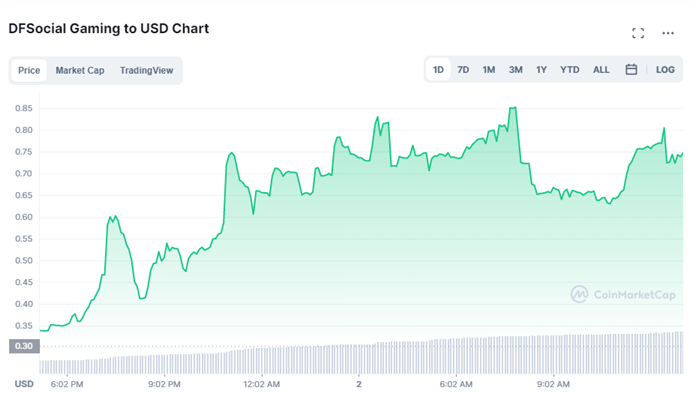 Following the launch of its new token, DFSocial has made huge progress in developing its ecosystem. For example, on Oct. 3, the BSC-based GameFi project, in partnership with Kiwix, hosted another gaming competition called “DFSocial Warzone Showdown.” Over 100 players participated for up to $5000 shared between nine winners. The protocol announced the winners on Oct. 4th via Twitter.

The project also added a new game, Clash Royale, to its gaming platform. In addition, DFSocial partnered with Finstreet to create play-to-earn content for their courses and social media accounts. The collaboration is huge for the DeFi project as Finstreet is India’s largest crypto educational platform with over four million participants including 939,000 students and over 1000 partners.

Finally, the project has garnered huge adoption in recent weeks and has been seeing an influx of users. Not only has the protocol surpassed 25,000 users across all its social media platforms, but DFSocial was the top gaming daily earner on CoinGecko on Oct. 8. What’s more, the protocol also recorded another huge feat on Oct. 11, becoming the third leading weekly gainer on CoinMarketCap.

The protocol started on a bright note in November after launching its new DFSG/BNB pool on PancakeSwap, along with its new Clash Royal game. All focus now lies on more marketing plans with top crypto influencers, followed by new partnerships, new games, more features and many more.